Parking (Map to courthouse)
There are parking meters on the streets around the building and several parking garages within a few blocks of the building.

General Information
The Roman L. Hruska Federal Courthouse, located at 111 South 18th Plaza, Omaha, Nebraska, was completed in June 2000. It is a rectangular-shaped structure, with an area carved out on the front to allow light into the interior atrium. A four-part atrium roof feature gives the building a unique profile, while allowing large skylights to illuminate the atrium. The building has 6 stories. Four stories are above ground at the west or front entrance; six stories are above ground at the east, or back side of the building. It has 350,113 gross square feet of space. The United States District Court is the lead agency in this facility. This courthouse was the first in the Nation commissioned under GSA’s Design Excellence Program.

This facility is owned by the people of the United States and operated by the General Services Administration (GSA). 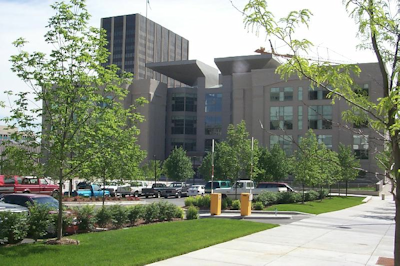